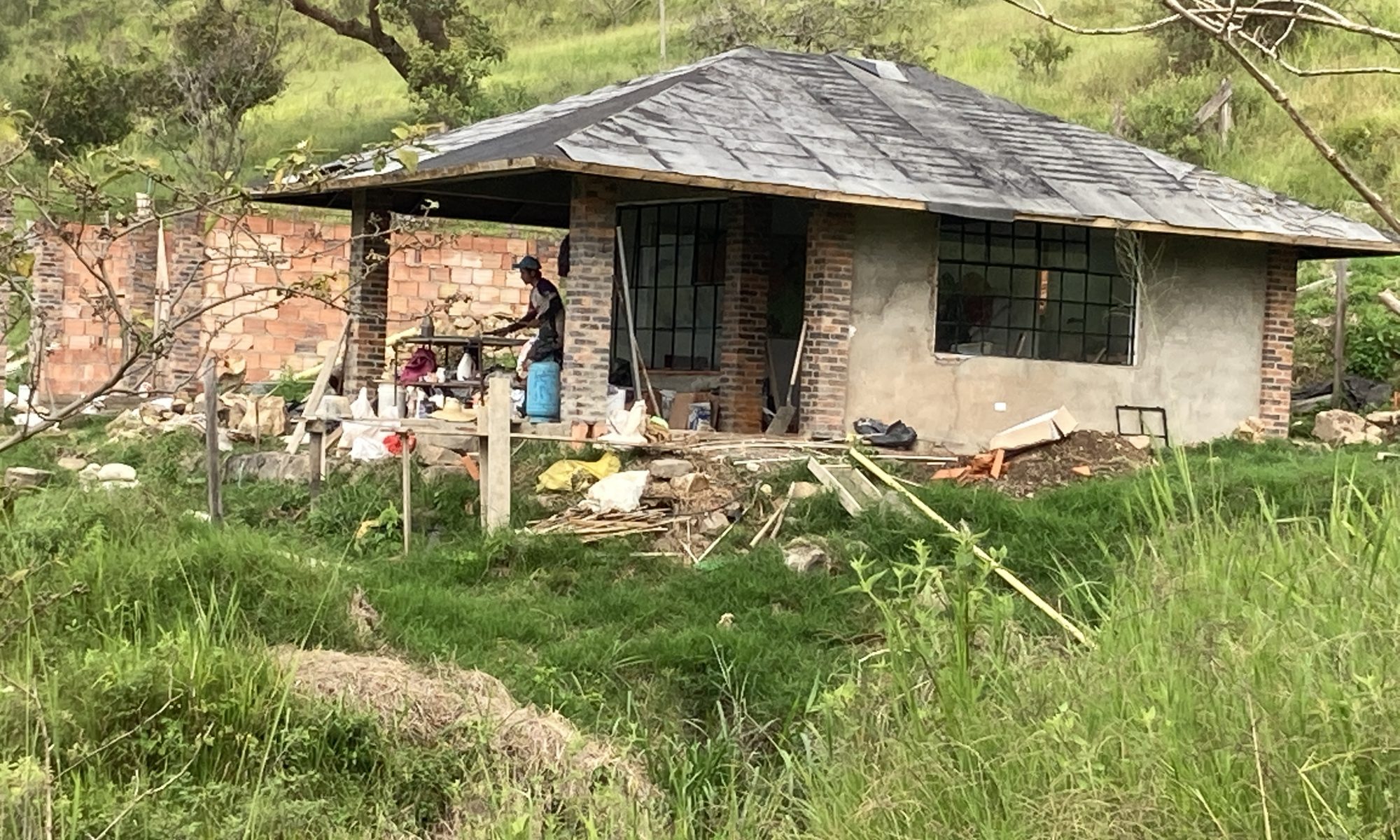 I’ve resided at the residency at ArteSumapaz for over three and a half years, and in the process, discovered that while I crave community, I need my own space. I’m not quite ready to construct my own house, so embarked on building a small house, or cabin, that afterwards can be another space in the residency. And while I had my share of experience with construction back in upstate New York, the Colombian approach to construction is quite different. Thus, in short, I’ve learned a lot, and would like to share some of those experiences in this post.

As this cabin is going to be a part of the residency, I wanted it to have a stylistic relationship to the other buildings on the campus. I’ve also been inspired by traditional Colombian buildings. You can see a range of images on this Pinterest board.

The obvious difference between North American houses and building here is that here, it is primarily masonry construction. Thats not true of all of Colombia, but in this region, we have incredible termites and other wood-eating insects. It can also be pretty warm here, so masonry construction lends itself to staying cool. I opted for an exaggerated overhang which you see a lot in the Magdalena Valley. I’m glad I did, as it reduces the amount of direct sun coming into the large windows, and helps to shed water away from the house foundation.

Another challenge in this project was to work in a way that local builders would have some knowledge base in what we wanted to do. Some things were new, as clay tile roofs, bamboo ceilings, and terracotta pavers are not used so much in this region. Our master builder was up for the challenge, though, and we all have a lot of lessons learned for the next project.

A few things are available here in Colombia that would be prohibitively costly back in the US; custom-crafted steel windows, terracotta roof, handmade terracotta floor, and custom woodwork.

The roof structure here is made from a metal framework, painted black, with a covering of guadua, the Colombian bamboo used in construction. In this case, the bamboo has been flattened out into sheets called esterilla. The esterilla first had to be soaked in a bath of boric acid and borax to preserve the wood. It would have been easier to paint the material with preservative, but boric acid and borax are less toxic to humans.

The front door was inspired by old doors to be seen in the nearby villages of Portones and Pandi.

For our roofing material we opted for handmade teja arabe from Ambalema, a small village on the Magdalena where there are several small artisanal brick makers. We also purchased our valdosa, the terracotta floor pavers from the same brick-maker. I scoured Google for information about laying the pavers, which are more popular in Spain. The traditional method is to coat each tile with linseed oil – but more contemporary installers opt for sealants. We had to experiment with different products, as specialty products for sealing clay tiles aren’t sold here; a Sika product for sealing concrete ended up being our choice.

On the roof, a thin layer of concrete was laid over the top of the esterilla, and then coated with tar and tar roofing. Basically, that has to be waterproof before the clay tiles are laid on top.

Metal windows are something that in my experience, were prohibitively expensive back in the US. In Colombia, the local builders only put the glass in with a bead of silicone, whereas the traditional method in Northeast factory windows is that the glass is held in with a clip, then glazed. That glazing isn’t available here, but we did find an asphalt-based product that works quite well, and matched our painting the windows black. The clips were available through Amazon, and only required the drilling of a small hold on two sides of each glass pane.

One difficult experience I’ve had on several occasions here is that I would create very accurate drawings of windows or doors, only to have the dimensions of the drawing ignored by the metal or wood worker. Usually, after that first mishap and some serious discussions, in the following projects, the drawings were followed more closely; thus its a good idea to emphasize the importance of the drawings from the get-go.

Another frustration has been timing. Very often, workers wouldn’t show up, or the project was otherwise delayed. In this case, the difference between the original estimated time and the reality was over three months. For this, we’ve dubbed the cabin, “Casa Ya Casi,” meaning “almost there!”

The more I can keep a sense of humor, the better. We North-americans can be somewhat intense about deadlines and such, while here, time is a bit more fluid. Keeping a sense of humor has been just about one of the most important things for me.

One point that is important to note is that the costs were kept to a minimum as I myself was able to act as the project manager.

I am excited to learn though that the costs could be kept so low, even without always choosing the least expensive options. But if you do need to work with an architect or construction manager, and not just the local maestro, you should anticipate a good 20-30% more in cost.

Some items that could be changed to bring the cost even lower:

I personally like these touches, but if you really need to economize, you could probably reduce the overall costs by a good 30-40%. Adding a second floor would probably cost in the ballpark of an additional 50% , but doubling the square footage of living space.

Note: we are still in the tail end of details, including the installation of the roof tiles. I’ll update this post with more, soon!

If you’re interested in our intentional community project, feel free to reach out to me directly for a conversation.